US states move to stop prisons charging inmates for reading and video calls: Draft bill aims to curb rise of pay-per-minute ebooks and costly facetime calls in prisons where visits are banned or restricted

Lawmakers in three US states are drafting a bill that they hope will end the growing trend of prisons charging inmates high fees for reading ebooks or making video calls to their families, while paying under a dollar an hour for prison labour.

In December, the West Virginia Division of Corrections and Rehabilitation launched a pay-per-minute ebook policy, which charges inmates five cents (4p) per minute of reading. The fee equates to roughly an hour of prison labour.

In Missouri, where prison visits are increasingly being banned or restricted, inmates are being charged more than one month’s prison wages ($7.50) to make a 30-minute video call.

Congressional representatives David Trone of Maryland, Mikie Sherrill of New Jersey and Abigail Spanberger, of Virginia, are looking to create a bipartisan-supported bill to curb the practice.

“It’s clear that the criminal justice system is unjust and disproportionately impacts communities of colour,” said Trone. “Access to books and other educational materials for prisoners just makes sense. Instead of exploiting our prison population, we need to focus on getting them ready for re-entry in the workforce, schools, and our communities.”

Critics say that the charges throw into stark relief the huge gap between prison pay and the rising costs charged for services that were traditionally free and viewed as essential in helping inmates maintain contact with the outside world.

In 2017, research by the Prison Policy Initiative found that the average minimum daily wage paid to incarcerated workers across the country was 86 cents, down from 93 cents in 2001.

“You are basically squeezing a profit from the most marginalised and poorest group of people in society,” said David Fathi, director of the American Civil Liberties Union’s national prison project.

“They literally have no financial resources. There is no justification for charging people to read or to talk to their loved ones. The privatisation of incarceration and the profit motive is outrageous. If these policies are not modified I see a legal challenge and fully support legislation against this.”

Prisons have long argued that paper items – such as books and letters – can be used to smuggle in illicit goods. Yet James Tager, of Pen America, a literacy advocacy group, said access to free literature should extend to everyone.

“These are forces of civic education and prisons are putting a premium on their access to rehabilitation. We believe books provide self-education, reconnection and diversion,” said Tager.

“We are not against giving incarcerated people different options. We are concerned that e-readers will be increasingly pushed out as the option and will winnow down access to literature.”

In a study conducted at the University of Texas Medical Branch in conjunction with the Texas Department of Criminal Justice in 2000, approximately 80% of inmates were reported to be functionally illiterate, with 48% found to be dyslexic. Slower reading speed will mean that inmates could be charged between $12-$18 for a 200-page book. 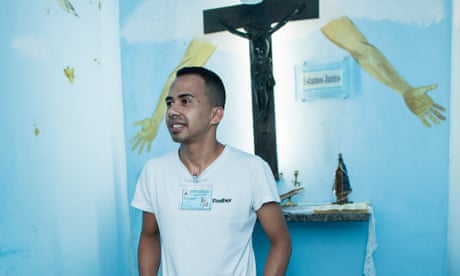 ‘I have no thought of escaping’: inside the Brazilian prisons with no guards

The West Virginia Division of Corrections and Rehabilitation said physical copies of books would be offered to inmates, with ebooks merely an additional service.

The state agency said in an email: “No inmate is forced to use a tablet. Instead, the tablets offer an additional option for inmates to access books, music, and other materials. In addition, the tablets provide video visitation and messaging that allow inmates to interact with family or friends who might not otherwise have such contact because of distance, disability and the like.”

Mandatory – or forced – prison labour still exists in many correctional facilities across the US in states including Mississippi and Alabama. In other states, such as Texas, Arkansas, Alabama and Georgia, prisoners are not paid at all for their labour, although authorities say they are compensated in other ways, such as time off their sentences.

Prison labour in the US is explicitly allowed under the 13th amendment of the constitution as punishment for committing a crime. In one case in Alabama, inmates who led a protest movement against forced labour were put in long-term solitary confinement.

Are you, or someone you know, struggling with a mental health or substance use disorder?

You are not alone.

Over the course of a year, we recently lost 100,000 sons, daughters, moms, and dads to drug overdoses. Millions are suffering from mental illness, exacerbated by the pandemic. Together, we must take action to save lives.

To receive updates on my team’s efforts, sign up for the newsletter now.